Presentation of the LIFE ECOGRANULARWATER Project in Torre Cardela 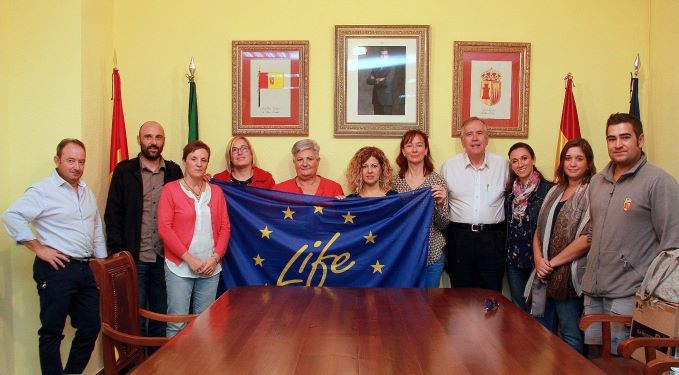 The Provincial Council of Granada, in cooperation with the University of Granada, Aalto University and Construcciones Otero Company, have presented the ECOGRANULARWATER Project, which aims to improve the groundwater treatment dedicated to human supply in Torre Cardela. The objective is to remove nitrates and other pollutants from water. The proposal was submitted to the LIFE Programme, Call 2016, in September 2016. On 29th May 2017, the Grant Agreement was signed between the Provincial Council of Granada and the European Commission, with a total budget of €995,000 and a European Union contribution of €546,113.

The pilot experience will be developed in the Torre Cardela municipality in the “Montes Orientales” area of Granada Province, where, according to mayor, Concepción Moreno, “the nitrate pollution in the aquifers supplying the community is a big issue”.

Nitrate concentration in drinking water must be kept under 50 milligrams per litre. In order to comply with this limit, some municipalities, such as Torre Cardela, use denitrification systems based on reverse osmosis processes. However, the mayor has stated that they are not only expensive, but also unsustainable because they reject 20 % of water, which is a large quantity in an area affected by water scarcity.

The Project involves actions such as the design and installation of the pilot groundwater treatment plant with monitoring and analysing actions, which will enable the demonstration of the proper plant operation and the extent of the objectives.  A wide communication plan for the dissemination of the project and its results is also expected, in addition to actions which aim to promote the replicability of the technology at a European level, focusing on areas affected by the same problem.

The objective of the LIFE Programme is to support innovative projects which offer solutions to environmental problems present across Europe, in order to transfer the results to other areas of the European Union after having demonstrated their economic and technical feasibility.

2018-02-21
Previous Post: LIFE 16 Meeting in Brussels.
Next Post: Leaflet of the LIFE ECOGRANULARWATER project
Provincial Council of Granada | C/Periodista Barrios Talavera,1 | 18014 (Granada)
Legal Notice | Cookies Policy | WEB DESIGN
We use cookies to ensure that we give the best user experience on our website. If you continue to use this site, we will assume that you agree.I agree