Suez Agua Concesiones Ibérica, S.L.U. Group and Hidralia, Gestión Integral de Aguas de Andalucía, S.A. are interested in the LIFE ECOGRANULARWATER project and are proposed as collaborators in the implementation of the System 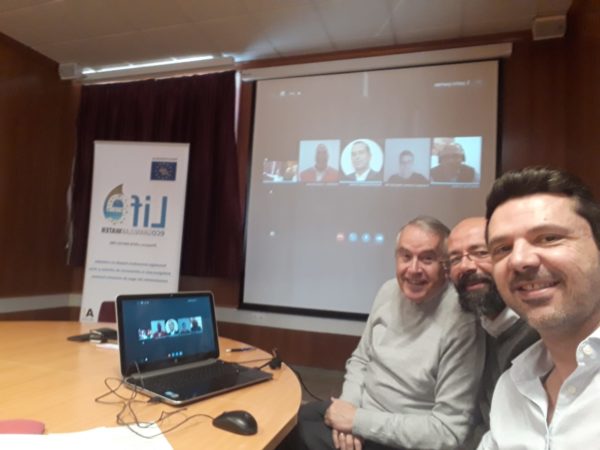 Suez Agua Concesiones Ibérica, S.L.U. Group and Hidralia, Gestión Integral de Aguas de Andalucía, S.A. They are interested in the LIFE ECOGRANULARWATER project and propose themselves as collaborators in the implementation of the nitrate decontamination system for water intended for human consumption.

Hidralia, Gestión Integral de Aguas de Andalucía, SA, Andalusian company in the environmental sector that manages the integral water cycle, present in seven of the eight Andalusian provinces, and Suez Agua Concesiones Ibérica, SLU, a leading group in the environmental sector, at belonging to Hidralia, who works to guarantee the availability of water, its sustainable management and sanitation for all, both in the industrial and agricultural fields, bet on the technology of the LIFE ECOGRANULARWATER Project and offer the project’s Working Group its commitment to cooperation and collaboration in the implementation of the project once the testing period ends.

On March 10, representatives of the Suez Group, Philippe Rouge and Maria Del Pilar Rodriguez Gutierrez, together with representatives of Hidralia, Gustavo Calero Diaz and Ernesto Sanchez Rodriguez, met with Jesús González-López Professor at the UGR and Francisco Javier García Martínez , Project Coordinator and Head of Service of the Integral Water Cycle of the Granada Provincial Council via videoconference from the headquarters of the UGR Water Institute in Granada.

Nitrate contamination of water intended for human consumption is a problem suffered by a large number of municipalities, not only in the province of Granada but also in the rest of the Andalusian provinces, among others, in which both Hidralia and the Suez Group have been operating for over 25 years.

It is a problem spread throughout Europe that requires both preventive measures and immediate solutions that allow the consumption of water with the quality required by legislation. When the nitrate concentration exceeds 50 mg / l the water is declared “not suitable for human consumption”.

The meeting was held at the request of the Suez Group, who showed interest in learning about both the project and the technology being applied at the Torre Cardela pilot plant.

During the Videoconference, both Jesús González-López and Francisco Javier García presented in detail what the project consists of, which entities are involved, how it is intended to address the problem of water contamination by nitrates through a biological system of lower cost than other existing technologies and what progress has been made so far.

The data generated so far shows that the ECOGRANULARWATER biological system works and is capable of removing the nitrogen present in the water with a yield of over 70%. In the coming months it is expected to expand the number of bioreactors in order to increase the volume of drinking water.

In this sense, one of the results expected to be achieved with the project is to know the economic cost of treating a cubic meter of water with this biological technology, so that it can be valued by other municipalities as a solution to the nitrate problem in drinking water.

The LIFE ECOGRANULARWATER project (LIFE 16 / ENV / ES / 196) is a project financed by the LIFE Program of the European Union within the theme “Drinking water” in the 2016 call.

The project’s partner entities are the Provincial Government of Granada, as its coordinating entity, the University of Granada, AALTO (University of Finland) and GEDAR SL, a company currently incorporated into the Working Group.

2020-03-13
Previous Post: The University Institute of Water Research of the UGR participated in the 2nd BioRemid2019 congress in Porto (Portugal) with an Exhibition and a Poster of results
Next Post: We request to EASME the addition of a new partner: Gedar S.L. – Water and Waste Management.
Provincial Council of Granada | C/Periodista Barrios Talavera,1 | 18014 (Granada)
Legal Notice and Privacy Policy | Cookies Policy | WEB DESIGN