Advance of the Study of the productive and non-productive activities of Andalusia, potential beneficiaries of the implementation of the LIFE ECOGRANULARWATER Technology 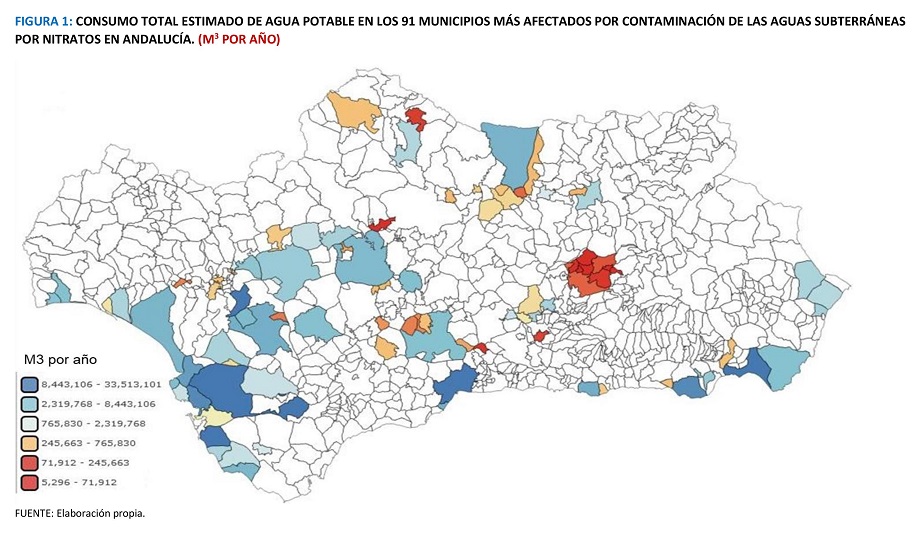 The implementation of the technology developed in this LIFE project in other municipalities of the EU will bring important benefits for the activities that consume more drinking water, whether productive or non-productive.

The work carried out so far has made it possible to identify how the water supply is distributed among business activities, households and municipal public services and where the largest beneficiaries are concentrated according to their water consumption.

The new technology developed will allow remove the nitrates and other pollutants in the groundwater using biological methods, at lower operating costs than current conventional processes, such as reverse osmosis, and generating a lower carbon footprint in the environment. This novel system opens up great possibilities for commercialization and replication in other municipalities with problems of pollution of aquifers by nitrates of agricultural sources, as it occurs in Torre Cardela, the municipality chosen to build the pilot plant.

As a continuation to other works developed in Action B3 of the Project, within the framework of the Transfer and Replicability of technology and solutions, an analysis has been undertaken of which will be the main beneficiaries of the project, among which are the homes, the activities business and municipal public services.

From a productive point of view, the greatest benefits will be produced in the areas that register the highest concentration of business activities with the greatest demand for drinking water.

In the case of non-productive activities, households will be the most benefited sector, since they absorb the largest proportion of the potable water supplied.

The data analyzed, in relation to how the consumption of potable water supplied by the network is distributed, reveals a similar distribution both in Spain and Andalusia as a whole, and in the 91 Andalusian municipalities selected because they have greater problems of contamination of groundwater by nitrates

The highest consumption of drinking water is mainly in households, which account for around 70% of the water distributed, followed by business activities and municipal public services, with approximately 20% and 10%, respectively. In the 91 selected municipalities, water consumption by households registers a greater weight on the total (75.91%) compared to the whole of Spain and Andalusia, to the detriment of the consumption made by productive activities; that is due to the lower business dynamism that show these municipalities in an aggregate form.

The business activities with the highest average water consumption per company or per employee are registered in the manufacturing industrial sector and in some subsectors of services.

Within the industry, if we exclude the ”Manufacture of coke and refined petroleum products” branch, due to its scarce presence at the national and Andalusian level, the activities with the greatest need for drinking water are the ”Manufacture of chemicals, rubber and plastic products”, with a water consumption of 10,139 m3 per company per year, and the ”Food products, beverages and tobacco” (3,226.8 m3/company and year).

Based on the average water consumption values by branch of activity, an estimate was made of the total potable water needs demanded by the business activities existing in the 91 Andalusian municipalities with the greatest problems of nitrate pollution, as well as by the rest of non-productive activities (households and municipal public services). In this way, the municipalities with the largest demand of potable water have been identified, which makes them more attractive for the commercialization of the technology developed in this project.

The results of the analysis reveal a large presence of agro-food industries in the analyzed territory, which together with the large consumption of drinking water required by this activity, makes it the branch that demands more water in global terms and, therefore, the one that will benefit to a greater extent with the implementation of the new technology. Other industrial activities with high water consumption and relevant presence in the territory are the industries of ”Chemicals, rubber and plastic products”, ”Basic metals and fabricated metal products”, ”Other non-metallic mineral products” and the branches of medium and high technological content (machinery and mechanical equipment, electronic, optical and transport vehicles).

Other productive activities that also stand out by a greater demand of potable water in global terms, belong to the service sector, especially, those related to tourism (accommodation and food and beverage services), followed by trade, health and welfare activities, education, artistic, recreational and other services.

Consequently, the municipalities that register a greater presence of business activities in the branches of industry and services indicated above, will also be the most benefited after the implementation of the technology proposed in this project, since they will reduce the operating costs associated with treatment and purification of supply water, using the resources saved in the improvement of the integral water cycle or in other uses that result in the social welfare of the population.

The territorial analysis carried out shows that the highest consumption of water in business activities takes place in the municipalities of the Andalusian coast and also in those inland municipalities close to the main high-speed roads. In the coastal areas there is also a high concentration of tourist activities (hotels, apartments, restaurants, leisure and recreation activities, etc.) that are the ones that make the highest consumption of drinking water.

In the case of the water demand for non-productive uses, higher levels of consumption can be seen in the coastal municipalities, which may be associated with a greater presence of urbanizations with gardens and swimming pools, parks and golf courses, etc. However, in the interior areas lower consumption is recorded, with some exceptions in municipalities of the Metropolitan Area of Granada and in the Northern Area of Jaén, among which stand out for their larger population, Andújar and Baeza.

Finally, grouping the productive and non-productive activities, the attached map has been drawn up (Figure 1), which shows the estimated total consumption of drinking water in the 91 selected Andalusian municipalities. 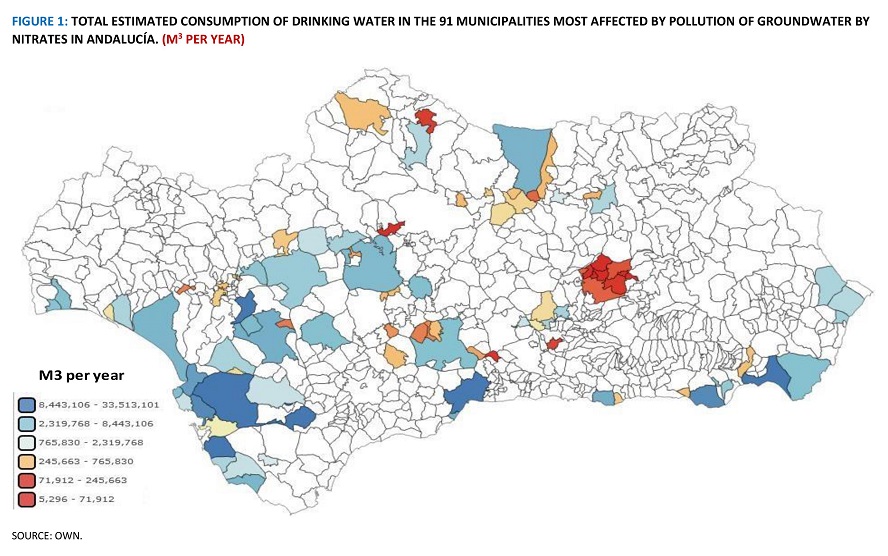 Again, the municipalities that require the largest volumes of water are located on the Andalusian coast, and also along the route of the high-speed roads that connect Seville with Cádiz, Huelva and Málaga.

On the opposite side are the municipalities included in the ”Region of Montes” in Granada, to which Torre Cardela belongs, since they present a lower demographic and business dynamism.

2019-05-06
Previous Post: NETWORKING: LIFE MCUBO – minimize the environmental impact related to water management in the food industry
Next Post: The Department of Microbiology Environmental Techniques Research Group, University of Granada, presents the progress of the LIFE Project at the EWA Congress in Copenhagen
Provincial Council of Granada | C/Periodista Barrios Talavera,1 | 18014 (Granada)
Legal Notice | Cookies Policy | WEB DESIGN
We use cookies to ensure that we give the best user experience on our website. If you continue to use this site, we will assume that you agree.I agree