The University of Granada promotes the transfer of the LIFE Project in different National and International Scientific Congresses to establish relationships with other potential collaborators and disseminate the research carried out.

The FEMS Congress specialized in microbiology, organized by the Federation of European Microbiological Societies, during which Barbara Muñoz-Palazón presented the results of the Research carried out in the Department of Microbiology, took place in Glasgow from 7 to 11 July of the Research Group in Environmental Techniques of the UGR.

On 10th -12th July, the SEFIN Congress specialized in nitrogen fixation was held in Madrid, organized by the Spanish Nitrogen Fixation Society, during which Jesús González-López, Professor of Microbiology at the UGR , Belén Rodelas-González Professor of Microbiology at the UGR and Miguel Hurtado Martínez, a PhD student at the UGR, presented the progress of the Research on the elimination of nitrates and pesticides from underground water via denitrification in granular aerobic systems.

The University of Granada has promoted the dissemination of the LIFE Project in the month of July, mainly framing the advances related to the A.2 action of the project carried out by the University of Granada, in diversity of National and International Scientific Congresses. The objective is to establish relationships with potential collaborators and disseminate the latest research to introduce in the scientific field, as well as the latest technologies designed to solve environmental problems derived from bad practices or agricultural problems, mainly in the Mediterranean area. 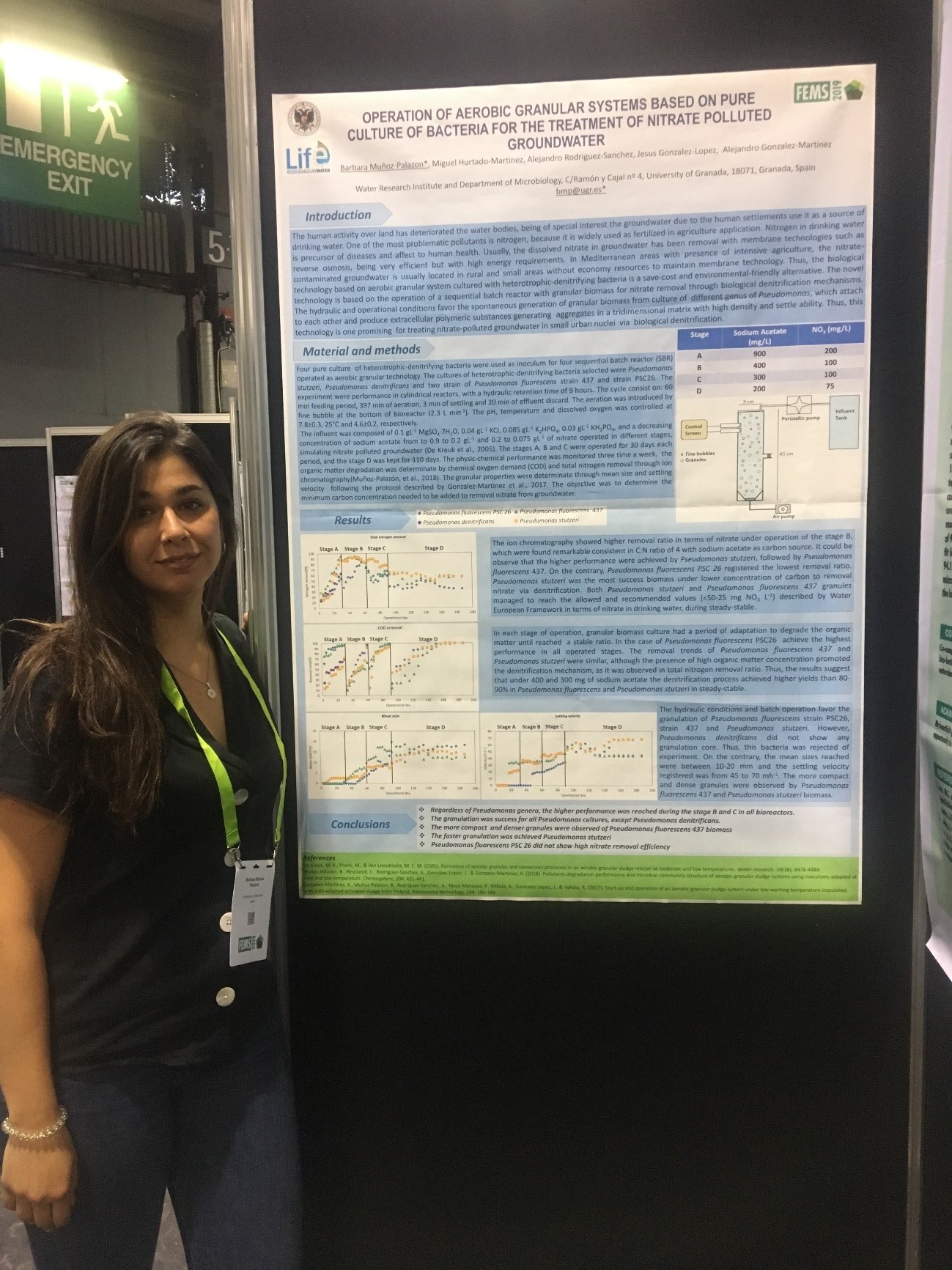 The FEMS Congress is the only scientific meeting of European and international level that provides a global vision in microbiology. On this occasion the Congress took place in Glasgow (Scotland), with the aim of creating dialogue and interdisciplinary discussions between all the specialties in microbiology, from basic research to applications in all sectors. Different technical teams from Universities, Research Centers and Technological Entities met to meet and share research experiences and the latest advances in this field.

Bárbara Muñoz Palazón, Researcher from the Department of Microbiology of the Research Group on Environmental Techniques of the UGR, presented the results of the work carried out on the Start-up and operation of granular aerobic systems. These are based on pure cultures of denitrifying bacteria implemented in pilot bioreactors for the elimination of nitrates, pesticides and other compounds, present in groundwater intended for human consumption, the first activity of the LIFE ECOGRANULARWATER Project.

In its exhibition – poster, called Operation “Operation Of Aerobic Granular Systems Based On Pure Culture Of Bacteria For The Treatment Of Nitrate Polluted Groundwater”, the UGR presented the research project that has been carried out in relation to:

On the other hand, SEFIN aims to: deepen knowledge and promote the development of Biological Nitrogen Fixation and beneficial interactions between plants and microorganisms, in order to improve and contribute to the protection of the environment. SEFIN also promotes the exchange of ideas between professionals interested in the development of agriculture and environmental protection, and promotes relations with other organizations that have similar or complementary objectives at national and international level. 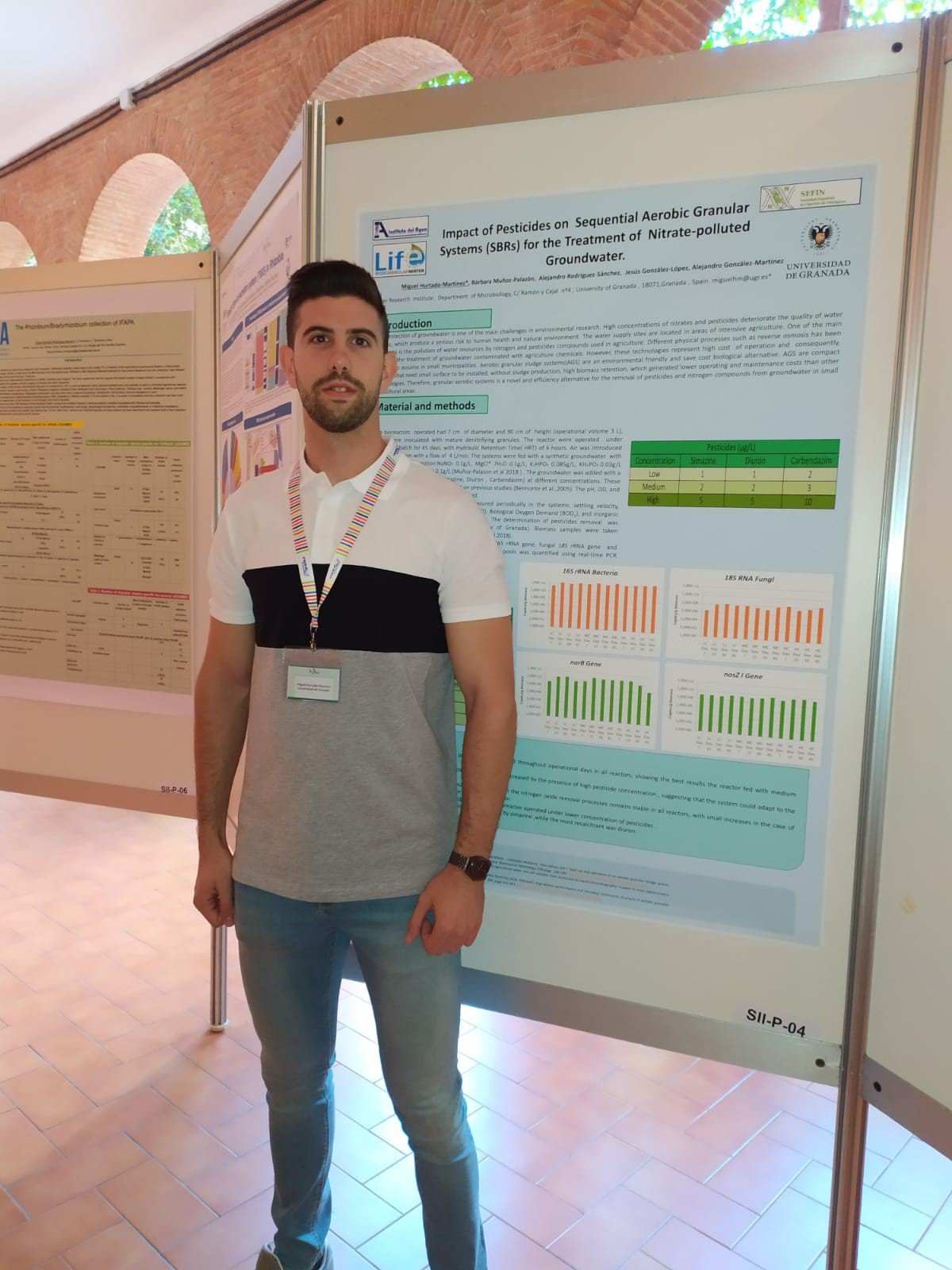 Jesús González López, Belén Rodelas González, Professor of Microbiology at the University of Granada, and Miguel Hurtado Martínez, Researcher at the Research Group on Environmental Techniques of the UGR, presented the results of the research on treatment using a granular aerobic system, inoculated with mud, for the treatment of underground water contaminated with nitrates and pesticides generated by applications in agriculture. All this object of the third experiment of the LIFE Project at laboratory scale.

In the exhibition, ’Impact of Pesticides on Sequential Aerobic Granular Systems (SBRs) for the Treatment of Nitrate-polluted Groundwater’, the researchers presented the biological system studied as a novel and competent technology for the elimination of compounds derived from agriculture, betting on the implementation of this system on a real scale in rural areas without high economic resources and with strong problems in compliance with European regulations regarding drinking water.

The investigation was based on:

As general results of the investigation it could be concluded:

Currently, the Microbiology Department of the UGR Environmental Techniques Research Group continues to monitor the commissioning and operation of the Pilot Plant installed in Torre Cardela, Granada.

2019-07-26
Previous Post: VII Steering Committee of the LIFE Project ECOGRANULARWATER
Next Post: The Water Research Institute of UGR has been present in the 46th IAH Congress, Málaga, the results of the hydrogeological study done in Torre Cardela (Granada)
Provincial Council of Granada | C/Periodista Barrios Talavera,1 | 18014 (Granada)
Legal Notice | Cookies Policy | WEB DESIGN
We use cookies to ensure that we give the best user experience on our website. If you continue to use this site, we will assume that you agree.I agree