Complete installation of the prototype of the LIFE ECOGRANULARWATER Project

This second phase has consisted in the expansion of drinking water treatment capacity with the proposed aerobic granular system, expanding the number of bioreactors.

After delays caused by both internal project difficulties and the situation caused by the pandemic, the prototype of the LIFE ECOGRANULARWATER project has been completely installed.

Due to the good results provided by the first phase of the prototype and taking into account space limitations in the Torre Cardela drinking water facilities, it was decided to manufacture the new bioreactors with two  GFRP (Glass-Fiber Reinforced Plastic ) tanks Food grade, 1 meter diameter by 3.5 meters high.

After placing the tanks next to the previous bioreactor, the raw water connections from the well water cistern were made with PVC pipes and pneumatic solenoid valves. Outlet pipes were installed to empty treated water to filter it and send it to the chlorination cistern, which supplies the town of Torre Cardela with drinking water. This will be once all the health permits have been approved.

The three reactors operate synchronously, with the following sequence: filling, operation with aeration, decanting and emptying. Equipment functional tests were carried out and everything operates correctly .To optimize operation, the system has been automated using a SIEMENS  PLC  (Programmable Logic Controller).

The treated water is passed through a bed filter, which will eliminate the presence of suspended solids. The facilities also have an artificial wetland dimensioned to treat the cleaning water of the bed filter, once it is saturated. This wetland was waterlogged. It has been discovered, it has been drilled allowing water to drain into the ground.

For safe access to the treatment plant, a metal structure was installed, consisting of a gangway with a railing and a non-slip ladder. This has left the system ready to be inoculated, which will allow the volume of water made drinkable with biological methods to be expanded.

Below are the images of such an enlargement and how the prototype has turned out. 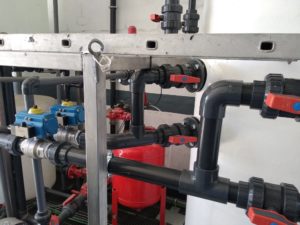 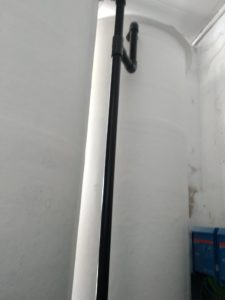 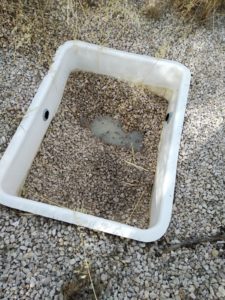 17.- Drillings made in the wetland.

19.- Gateway for acces to the bioreactors. 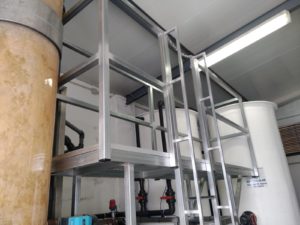 2020-08-04
Previous Post: ConCiencia, an informative Program from Canal Sur TV will dedicate a space to LIFE ECOGRANULARWATER project
Next Post: LIFE ECOGRANULARWATER present on the small screen
Provincial Council of Granada | C/Periodista Barrios Talavera,1 | 18014 (Granada)
Legal Notice | Cookies Policy | WEB DESIGN
We use cookies to ensure that we give the best user experience on our website. If you continue to use this site, we will assume that you agree.I agree