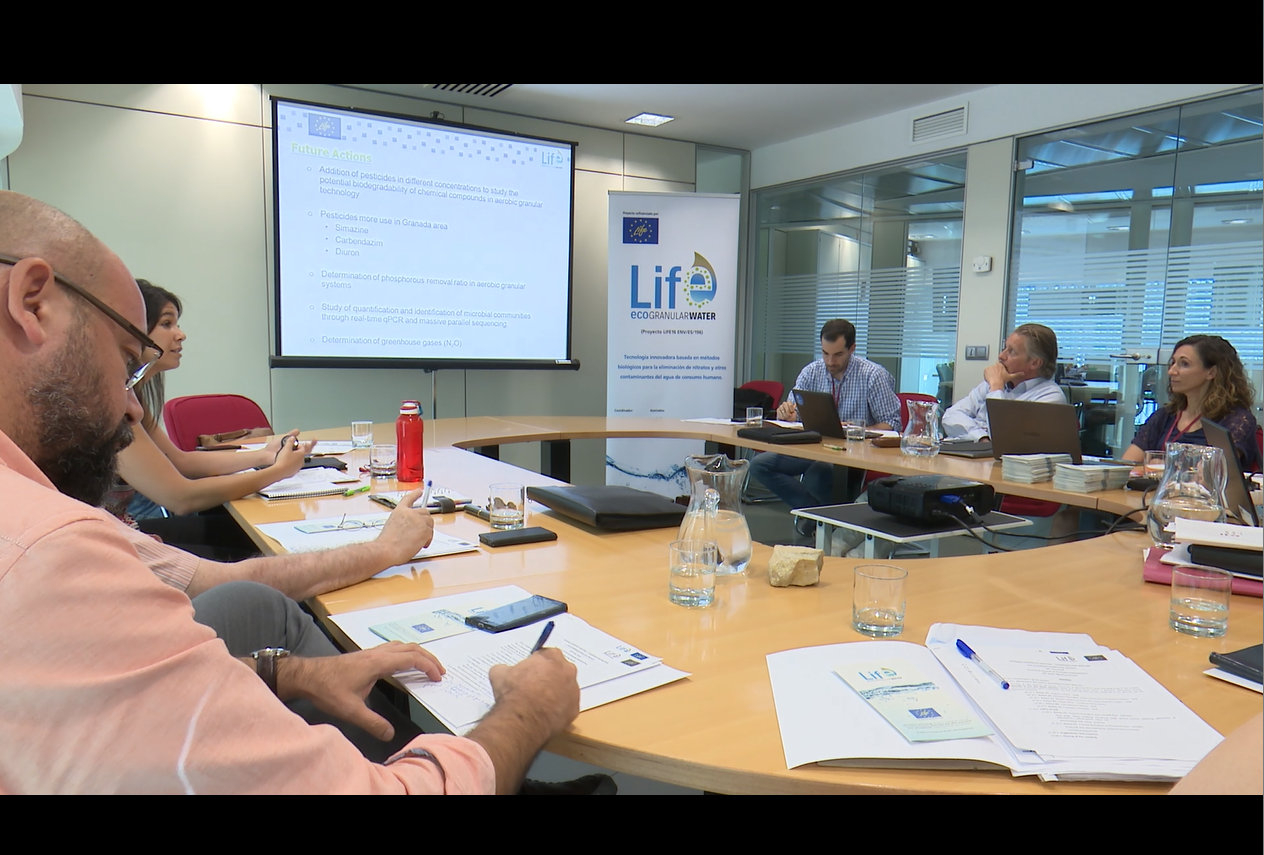 You can watch the video through https://youtu.be/P6G5_0rQGUE

Mrs. Concepción Moreno Alfaro, Mayoress of Torre Cardela (Granada) welcomes us to the municipality and presents the conditions of the water supply, highlighting the drawbacks of the current reverse osmosis system that the LIFE Project aims to solve with more economical and efficient technology.

Mr. Fco. Javier García Martínez, Head of Service of the Integral Water Cycle and Energy, explains the motivation and interest of the Provincial Council of Granada in the project and the importance of demonstrating the viability of the proposed solution in order to be applied in other territories of the province with similar problems. These are areas where aquifers are the only resources for water supply and they can present high levels of nitrates, harmful to human health.

Mr. Jesús González López, Professor of Microbiology at the University of Granada (Water Research Institute) reveals the importance of having the support of the Water Research Institute of the University of Granada. This entity is responsible for selecting the most appropriate microorganisms that allow the removal of nitrates, establishing not only the elimination of these products that are toxic but also establishing all the biological safety that makes possible the subsequent use of water as drinking water.

For his part, Mr. Riku Vahala, Professor of Water and Wastewater Engineering at AALTO University in Finland, explains the role that the University plays in the project, implementing a granular sludge technology already developed to treat wastewater and now applied for the production of drinking water, especially for the removal of nitrates from groundwater.

To carry out the implementation of this technology, Mr. Alejandro González Martínez, Professor at the University of Granada and previously linked to the University of AALTO, shows us in a practical way the experimental technology developed in the project of “aerobic granular systems”. This technology uses a regular phase bioreactor: it begins with the filling of the bioreactor, continues with a sequential aeration system, then a decanting system, and finally the system of emptying water free of nitrates.

Mrs. Isabel Nieto Gómez, Director of R+D+i – Construcciones Otero, exposes the commitment and responsibility of the Company with the LIFE ECOGRANULARWATER Project as they are in charge of the construction, start-up and subsequent maintenance of the water purification plant by biological methods, in Torre Cardela, under conditions of efficiency and effectiveness both in operation and in required maintenance.

The LIFE project also has the participation of the Departments of Applied Economics and International and Spanish Economics of the University of Granada who will carry out two studies.

On the other hand, Mr. José Antonio Salinas coordinates the development of the Business Plan and the commercialization of the Project and its technology based on an identification map of the areas of the European Union affected by the problem of groundwater pollution.

From Provincial Council of Granada, as her Deputy of Municipal and Environmental Assistance, Mrs. Mª Ángeles Blanco López expose the Project aims to provide a solution to the nitrate issue that exists in some municipalities in the Province of Granada.

You can watch the video through https://youtu.be/P6G5_0rQGUE

2019-02-20
Previous Post: First tests for the start-up of the purification plant
Next Post: Pilot plant starts testing phase at Torre Cardela
Provincial Council of Granada | C/Periodista Barrios Talavera,1 | 18014 (Granada)
Legal Notice | Cookies Policy | WEB DESIGN
We use cookies to ensure that we give the best user experience on our website. If you continue to use this site, we will assume that you agree.I agree