First tests for the start-up of the purification plant 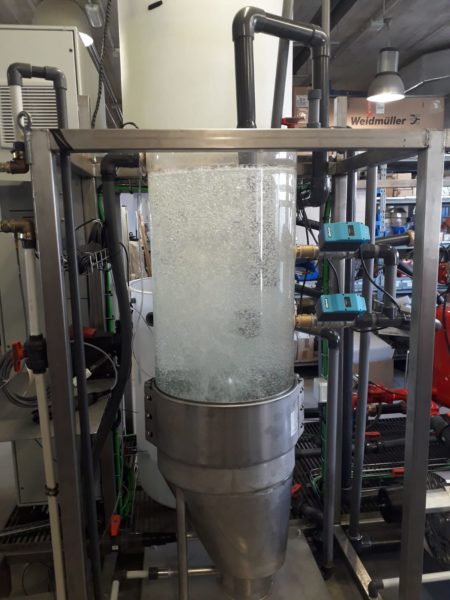 On Friday 8th February, the first tests for the start-up of the demonstration plant proposed in the LIFE ECOGRANULARWATER project were carried out in the workshop of the company Construcciones Otero. Representatives of three of the partners were present at this crucial moment of the project.

The first step in starting up the plant was to check that the hydraulics of the system are working properly and that the aeration is ideal so that the granules can be formed from the activated sludge. The tests consisted of the introduction of water into the system, to carry out the operation of the bioreactor in all its phases: filling, aeration, decanting and emptying. Tests have also been carried out on the filtration process after the biological treatment.

These are tests prior to installation in Torre Cardela, which allow the correct assembly of the plant to be checked and, in the event of detecting any small leakage or malfunction, to be adjusted in the workshop itself. In addition, the programming of the plant in the control system has been reviewed, adjusting it to the initial parameters defined in the laboratory.

The tests have been successful and it has been possible to verify that the system works properly, without incidents of relevance, and technicians will continue with the process of implementation once it is located in the facilities of Torre Cardela.

2019-02-14
Previous Post: What is the opinion of the population about the Municipal Water Services?
Next Post: Don’t miss the LIFE ECOGRANULARWATER Project Presentation Video
Provincial Council of Granada | C/Periodista Barrios Talavera,1 | 18014 (Granada)
Legal Notice | Cookies Policy | WEB DESIGN
We use cookies to ensure that we give the best user experience on our website. If you continue to use this site, we will assume that you agree.I agree