The business plan is a tool used to launch a business initiative, defining what will be the value proposition that the product or service provides in relation to the rest of the market competitors. For this, it is necessary to establish objectives and define strategies to achieve them, analyze the competition and the potential market, design an organizational structure, quantify the necessary investments and their financing, and study the economic and financial viability of the project.

In the present case, our value proposition offers great potential in relation to the traditional drinking water treatment systems that currently exist on the market. It is a new technology capable of producing clean water from nitrates, with a reduced carbon footprint, which does not generate reject water and with operating costs significantly lower than those borne by other competing technologies.

The potential market to which the commercialization of EGW technology could be directed is wide. The analysis carried out in the southern countries of the EU has made it possible to identify the areas most affected by nitrate contamination in groundwater, where around 22 million people live, and whose supply requires the treatment of more than 1.6 billion of m3 of water per year. 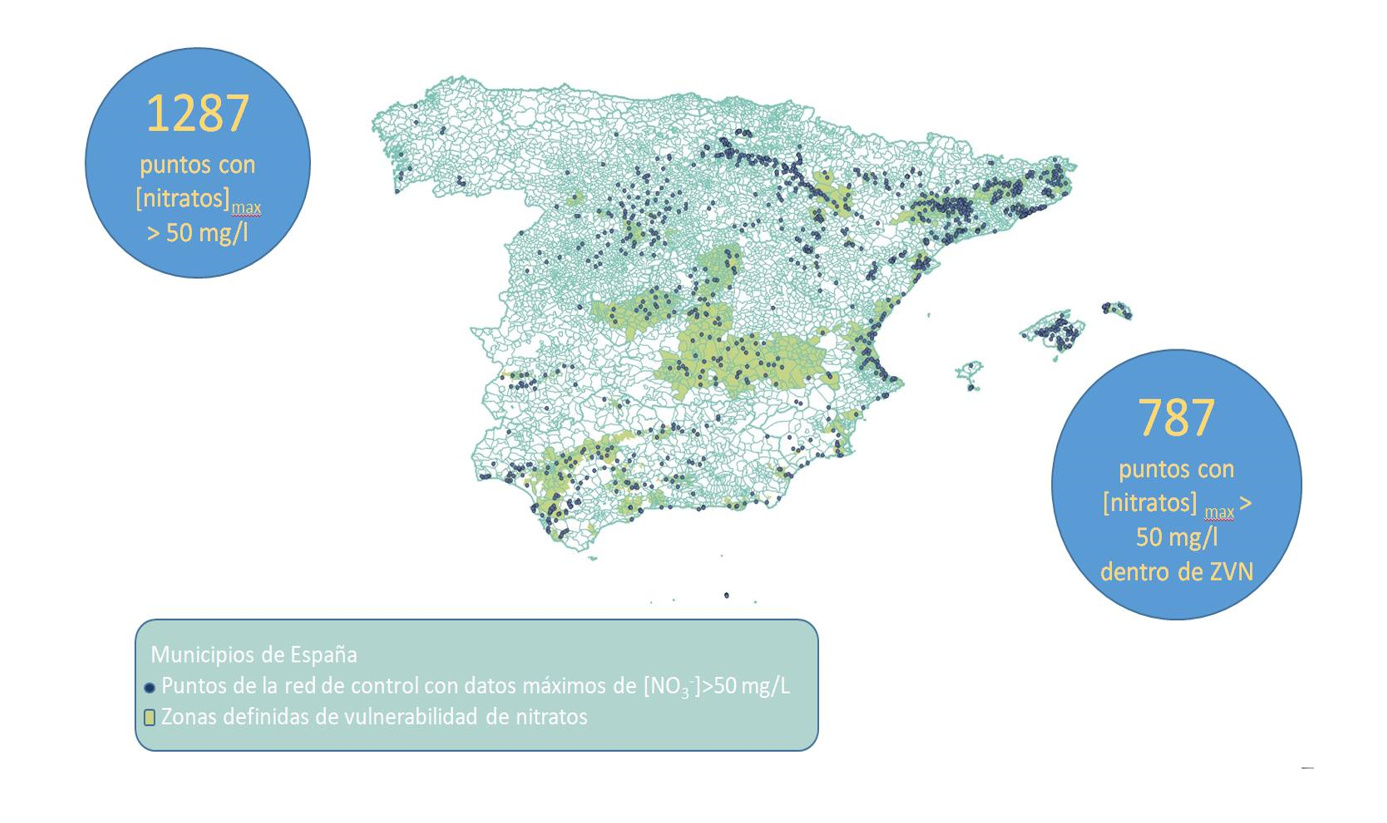 Map of areas affected by nitrate contamination in Spain.

In the business plan, an analysis of the general and specific environment that the technology commercialization company will face in the future has been carried out, concluding with a SWOT analysis. The main strengths of this project are supported by the value proposition defined above, together with its ability to generate cost savings that allow the recovery of the initial investment in half the years of the useful life of the plant, estimated between 15 and 20 years, and its contribution to the financial sustainability of smaller local corporations, which usually bear tariff deficits in water management.

Among the opportunities, it is worth highlighting the possibilities of attracting resources from the European Union, both from the Next Generation funds, as well as from the Multiannual Financial Framework 2021-2027, aimed at financing projects that promote the ecological and digital transition, such as the one that promotes this project. On the other hand, this technology could have more applications, not only in the drinking water production phase, but also in the purification phase, to treat the effluents generated by certain industries, thus avoiding the discharge of water with high concentrations of nitrates to the environment.

The main weaknesses and threats come from the uncertainty about the economic recovery after the COVID-19 pandemic, which may affect the purchasing power of potential customers and the risk that health authorities will not approve the implementation of this biological technology in certain areas of the EU, or that require control mechanisms or additional water treatment, which increase operating costs.

To face future challenges and achieve the objectives set, a strategic analysis has been undertaken, which includes the objectives, strategies and actions to be carried out by the marketing company to ensure the viability and continuity of the business in the medium and long term. Among the main strategies to be developed, it is recommended to invest in human capital and R&D, to continue innovating in the improvement and in the study of new applications of EGW technology, or in the development of other clean technologies that guarantee the sustained growth of the company in the future. Likewise, it is recommended to implement a comprehensive quality system, promote the collaboration and the establishment of alliances with other companies to reach more markets, seek leadership in sustainable development with the environment, and contribute with its activity to the social welfare of the population.

To achieve the proposed economic objectives, a marketing plan has also been drawn up, which includes the strategies and actions to be carried out in order to sell the EGW technology on the market. Two customer segments have been defined, the institutional segment and the business segment. The first segment includes municipalities and municipal associations, which are responsible for supplying drinking water at home. The second segment includes companies that develop production processes that require the use of large volumes of water, and also companies that manage the integral water cycle, which could incorporate the EGW technology in the drinking water treatment plants they manage. 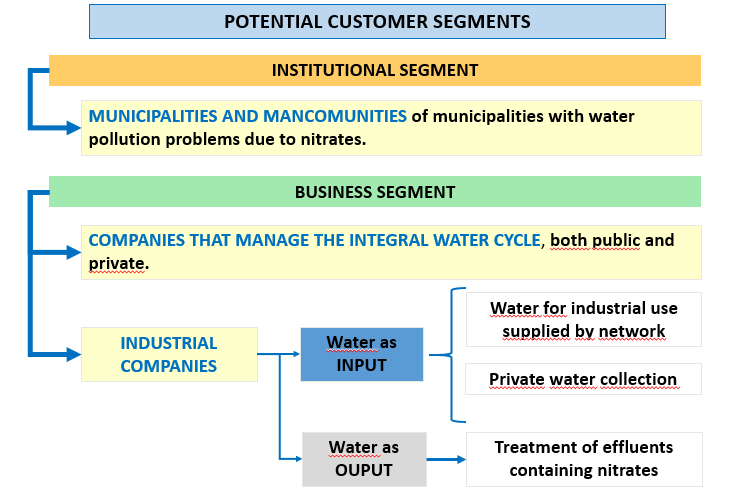 A differentiated strategy will be implemented for each segment, since the people who have to make the decision to acquire the EGW technology have different profiles and conditioning factors. In the first segment, investment decisions are conditioned by municipal governments, which depend mainly on the economic development of the municipality, the availability of budgetary resources and the capacity and level of indebtedness they possess. In the second segment, investment decision-making is more agile, as it depends on the management of the companies, which are mostly privately owned.

Among the proposed marketing actions, the creation of a sales team is recommended to carry out a direct and personalized marketing tasks with clients, the design and implementation of a promotional and advertising campaign adapted to each phase of product marketing, the management and maintenance of social networks and the planning of public relations actions. In global terms, it is essential to convey to potential customers the values and principles of the company in accordance with the strategic plan, enhance the differential factor of the new product compared to other substitute or alternative products, and provide the customer with a new added value in quality of the product and / or associated services, against the competition.

From the economic and financial point of view, the business viability of this project has been studied in three different demand scenarios, for a time horizon of 5 years, and under the assumption that the technology will be commercialized by an industrial company, of size medio, specialized in the production and installation of water treatment and purification systems. In an intermediate scenario, it is planned to install, throughout this period, a total of 40 water treatment plants with EGW technology. In the worst demand scenario, a sales target of 20 plants in the five years is estimated, while in the most optimistic scenario, a total of 60 plants would be reached. 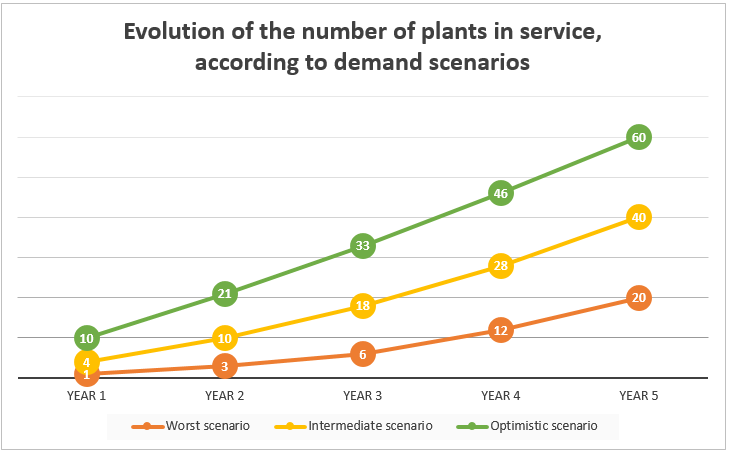 The results of the economic and financial feasibility study of this project are very positive. It has been estimated that the marketing company could obtain an average profitability, after five years, between 12% – 20% on the initial investment, depending on the demand scenario that occurred. In other words, the promoter company would double its turnover after five years and recoup the initial investment.

Likewise, the commercialization of EGW technology will generate employment, both direct and indirect. Depending on the behavior of demand, it is estimated that the average annual employment generated in the first five years will be 9 workers in the worst scenario, 19 in the intermediate scenario and 31 in the most favorable scenario.