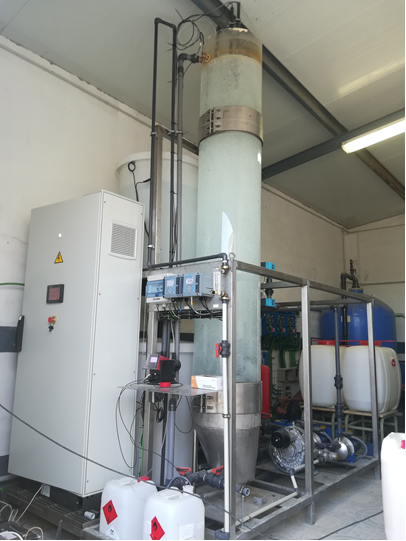 The LIFE ECOGRANULARWATER Project advances its results, which will be presented during the month of October on the occasion of the “First Technical Meeting about proposals for the purification of groundwater polluted by nitrates and pesticides” in Granada.

With the start-up of the Pilot Plant for the removal of nitrates, pesticides and other compounds, present in groundwater intended for human consumption in the Municipality of Torre-Cardela, the period of Testing and Monitoring of programming of technology began implemented.

Some changes are related to the pH, redox and temperature probes, which have been placed according to the process of aeration of the process.

Another of the necessary changes has been a new programming of the aeration and decantation process times, favoring the evolution of the formation of granules in the bioreactor.

The Monitoring of the Pilot Plant includes also the assessment of the energy consumption, which is generated by the solar panels installed in the Municipal Drinking water Treatment Plant, which will allow the Plant to be selfsufficient in energy terms.

In relation to the Diagnosis of the situation of the territories of the Mediterranean Arc, with special needs for  polluted by nitrates groundwater treatment, from the University of Granada have been in contact with various European governments in order to provide data necessary to select a the most critical municipalities, and to be able to elaborate an own map like the one made for Spain and Malta (See: https://bit.ly/2VhFnoF )

One of the key aspects of the LIFE ECOGRANULARWATER Project Pilot Plant is the Monitoring of physical-chemical parameters, in terms of yield and granulation, of the full-scale plant in Torre-Cardela.

For this, firstly, the inoculation of the sequential aerobic reactor was carried out periodically during the first three weeks of start-up.

During the start-up phase, different concentrations of organic matter were added, added as methanol, and finally a lower concentration of methanol added in the influent was tested, adding also 10 mg of phosphate per liter of influent groundwater, added as -hydrogen potassium phosphate.

During the first fortnight of May, a positive trend was not observed in terms of granulation and yield of elimination of organic matter and nitrate. These results suggested that denitrifying heterotrophic microorganisms did not have complete and absolute access to organic matter, possibly due to the absence of any growth factor.

Therefore, after the conclusions obtained during the first 10 weeks of start-up and operation of the bioreactor, the problem was addressed with the addition of a key factor for biological growth, phosphorus, with which its development is being studied.

A new strategy that is planned to start up consists in the inoculation of the bioreactor with already formed aerobic granules, from pilot plants operated in the Water Research Institute of the University of Granada, and, if necessary, the addition of small volumes of active sludge (25L) from the wastewater treatment plant “Biofactoria Sur” (Granada).

The results of these study strategies will soon be presented in October in Granada, on the occasion of the “First Technical Meeting about proposals for purification of groundwater polluted by nitrates and pesticides“, organized by the Provincial Council of Granada, the University of Granada and Construcciones OTERO SL.

Finally, the project integrates among its activities the Life Cycle Analysis of the Plant to identify the comparative impact of the current Reverse Osmosis Treatment Plant, as opposed to the Biological Technology of innovative application in groundwater for “Drinking Water”.

2019-06-10
Previous Post: The Department of Microbiology Environmental Techniques Research Group, University of Granada, presents the progress of the LIFE Project at the EWA Congress in Copenhagen
Next Post: VII Steering Committee of the LIFE Project ECOGRANULARWATER
Provincial Council of Granada | C/Periodista Barrios Talavera,1 | 18014 (Granada)
Legal Notice | Cookies Policy | WEB DESIGN
We use cookies to ensure that we give the best user experience on our website. If you continue to use this site, we will assume that you agree.I agree