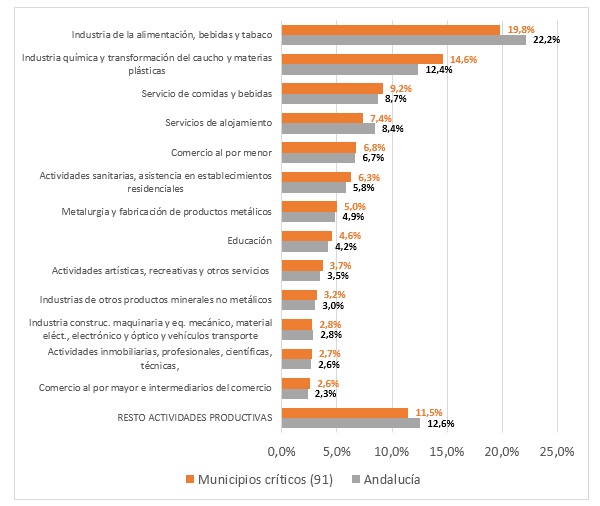 Households, the food and chemical industries, along with tourism, are the activities that could most benefit from the implementation of the LIFE ECOGRANULARWATER project technology in the Mediterranean countries of the European Union.

Within the works aimed at the transferability and replicability in other territories of the new technology developed in this LIFE project, a study has been carried out in four Mediterranean countries of the EU, that has allowed, on the one hand, to identify the areas with the greatest problems of nitrate contamination in groundwater and, on the other hand, determining the productive and non-productive sectors that carry out the most water consumption. With this, we have made an estimate of the potential market to direct the marketing actions of the technology in the future, as well as the water needs of the different types of customers who will most benefit from the introduction of this novel nitrate removal system.

As a continuation of the advance of results that was published on 05/06/2019, about the beneficiary activities of the technology developed in this LIFE project in the region of Andalusia, the results of the complete study are now presented, which carried out in four countries in the Mediterranean area of the European Union, among which are Spain, Italy, Greece and Malta.

From a productive point of view, the business activities that require a greater water consumption will perceive, to a larger extent, the benefits of this novel nitrate removal system, since they will be able to see an improved water quality used in their production processes. Likewise, among non-productive activities, households will be the most benefited sector, since they absorb the largest proportion of the supplied drinking water, followed by municipal public services.

At the territorial level, the municipalities that register a greater business activity and, in addition, said activity is concentrated in productive branches that demand a larger volume of drinking water to produce goods or services, will notice more intensely the benefits of the implementation of this technology, since they will save on the operating costs of managing the integral water cycle and will contribute positively to preserving the environment, with a lower generation of carbon footprint.

The rest of the productive branches listed in Table 1 are included in the service sector, highlighting, firstly, accommodation and restaurant services, which absorb around 16% of total water consumption, which is justified by the evident importance of tourism in the productive structure of the Mediterranean countries. Other branches of services with high water requirements, and more linked to the consumption of residents, are those related to “Health and healthcare activities” (5-7%), “Retail trade” (5-7%) and “Artistic, recreational activities and other services” (3-5%).

Table 1. Distribution in percentage of business activities with the highest water consumption. (Year 2018).

The analysis of water consumption in the four Mediterranean countries reveals a great similarity between them. The most of the drinking water needs are concentrated in households, which absorb around 70-80% of total water consumption, followed by business activities (20-30%) and, lastly, municipal public services (5-10%).

With a view to the Business Plan, estimates have been made of drinking water consumption in the areas most affected by the nitrates contamination problems in the four selected countries, which will allow planning the marketing objectives in stages. Thus, in the short term (first 3 years), the target territory will be the region of Andalusia, while in the medium term (4-6 years) the target territory will be extended to the rest of Spain, and in the long term (7-10 years) marketing will continue in the rest of the Mediterranean countries.

The estimates made for each territory at each stage are detailed below.

In this territory, a total of 91 municipalities affected by nitrates pollution of groundwater have been selected, that carry out an estimated annual water consumption of 193.17 million m3. Of this total, around 15% is demanded by business activities, mainly by the agri-food industry (1st) and by the chemical industry and transformation of rubber and plastic materials (2nd), as well as by tourist services (accommodation and restoration). The 75.91% of estimated consumption is intended to households and around the remaining 10% to municipal public services.

In the medium term, 62 municipalities have been selected in the rest of Spain, with special needs for action due to excess nitrates, for which, together, it estimates a water needs of 70 million m3 per year. Of this volume of water, 21.37% is consumed by business activities, while the rest is used for household consumption (71.56%) and municipal services (7.07%). The branches of activity that will demand the highest volume of water are the same as those identified in Andalusia, although the branch of “Chemical and transformation of rubber and plastic materials” leads the ranking, followed by the agri-food industry.

On a more distant horizon, the commercialization of the technology is expected in other Mediterranean countries. In the case of Malta, 10 municipalities have been selected, with an estimated water consumption of 5.2 million m3 per year, of which 26.52% is consumed by productive activities, while 73.48% remaining is destined to non-productive uses.

In the case of Italy, the critical points of the water control network have been grouped by NUTS 3 regions. It is estimated that these areas demand an annual water consumption of 1,091 million m3, of which 28.21% is it goes to business activities and the remaining 71.79% to non-productive activities, mainly households.

In Greece it is estimated that, in the NUTS 3 regions most affected by nitrate contamination of groundwater, the total water consumption would amount to 304.3 million m3 per year. Almost 15% of drinking water needs are directed to business activities, while the remaining 85% is consumed by households and municipal services (non-productive activities). Compared to the rest of the Mediterranean countries studied, Greece has a lower presence of business activities, which will mean, if the new water treatment technology developed in this project is implemented, a greater benefit for non-productive water users.

As a final conclusion, it can be affirmed that the estimated potential market in the Mediterranean countries is wide enough to ensure the future viability of the business plan of the project. As it has been seen, the analyzed territories present similar productive characteristics, which makes the water demanders present homogeneous consumption structures, highlighting households as the sector that absorbs around 70% of water needs.

As the analysis reveals, the productive branches that will benefit the most from the new technology, due to their higher water consumption, are concentrated in the “Food, beverage and tobacco industry” and in the “Chemical industry and transformation of rubber and plastic materials”, as well as in tourism-related services, such as accommodation and restaurants, which are subsectors with a relevant presence in the business structure of the Mediterranean countries.

In this sense, the study carried out has served to detect and size a new market niche among the companies that demand the most water in their production processes, since they are potential customers to implement our technology in their facilities, because they would improve the quality of the water that they use, either supplied through the network or extracted from their own deposits. This type of client, of a private nature, will complement the institutional client in charge of managing the integral water cycle, mainly, the municipalities or municipal associations. 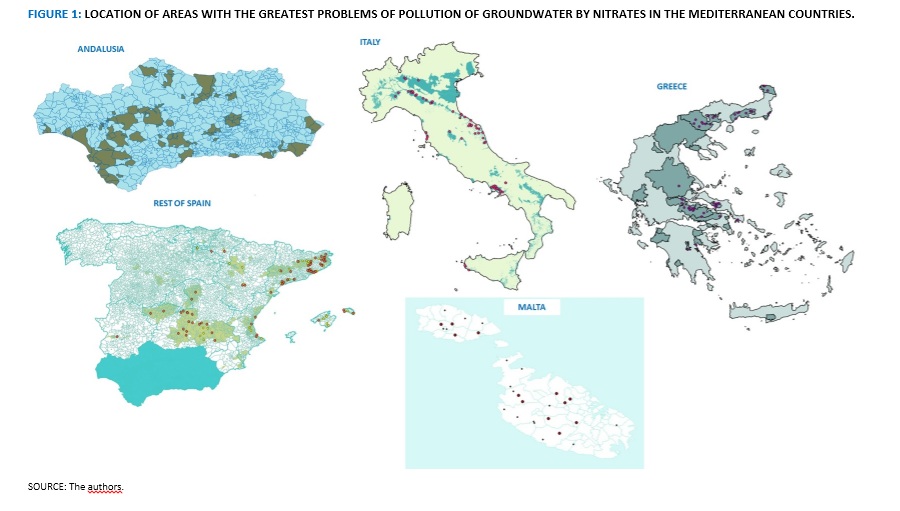 2020-07-28
Previous Post: LIFE ECOGRANULARWATER receives the virtual visit from the external monitor in june.
Next Post: ConCiencia, an informative Program from Canal Sur TV will dedicate a space to LIFE ECOGRANULARWATER project
Provincial Council of Granada | C/Periodista Barrios Talavera,1 | 18014 (Granada)
Legal Notice | Cookies Policy | WEB DESIGN
We use cookies to ensure that we give the best user experience on our website. If you continue to use this site, we will assume that you agree.I agree