University of Granada is researching with pure culture of denitrifying bacteria

The possibility of using bacteria strains that are capable of reducing nitrate and pesticides removal for drinking water is a goal for scientific research related to this environmental problem, which is being currently develop by ECOGRANULARWATER project.

In the preparatory action for the selection of bacteria strains, organic matter source and operational conditions of aerobic granular systems, University of Granada is testing with different species of bacteria, with the aim to identity the better inoculum, carbon source and hydraulic parameter for the higher performance in terms of pollutants removal in drinking water.

For the test, sequential bioreactors were startup (Figure 1), bases on four stage: aeration, settling of biomass, empty of treated water and feeding with contaminated water. The total volume for each bioreactor was 2,3L, which were aerated at the bottom of reactor by fine bubble with air flow rate of 4,5L min-1. The hydraulic retention time was 12 hours. The feeding water was synthetic, simulating the composition of contaminated water by nitrates. The microorganisms play the role of nitrate removal are heterotrophic by this reason it is necessary add organic carbon, in this test was used methanol and sodium acetate. In this sense, in different test the concentration of organic matter was gradually decreased during operation until find the minimum concentration, and thus optimize the economic costs. The nitrogen performance was studied related to the concentrations of organic matter and nitrate in the different stages.

The results obtained show that aerobic granular systems inoculated with pure culture of denitrifying bacteria are a potential technology for nitrate removal in groundwater, due to their high capacity for nutrient removal, the granular properties, compact design and cost saving.

It possible consult the description of process and the results obtained to date, in the following article: 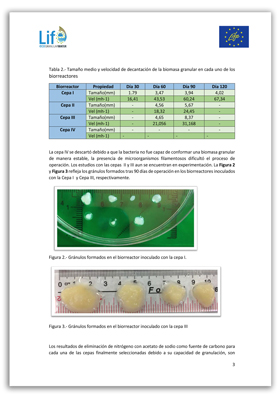 2018-05-14
Previous Post: We present the LIFE ECOGRANULARWATER Project to the VII GRAMAS Network Assembly
Next Post: Members of the Life Ecogranularwater Project’s beneficiary entities have signed the Partnership Agreement
Provincial Council of Granada | C/Periodista Barrios Talavera,1 | 18014 (Granada)
Legal Notice | Cookies Policy | WEB DESIGN
We use cookies to ensure that we give the best user experience on our website. If you continue to use this site, we will assume that you agree.I agree